Home » Blog » how to brush your teeth » Toothpicks: a Pointed Problem
Previous Next 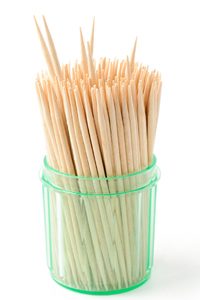 What’s long, slender, hard, sharp, indigestible and potentially hazardous? That common and seemingly harmless sliver of wood called a toothpick. Reports in the Journal of the American Medical Association point to toothpicks as causing thousands of injuries a year, mostly to young children. Youngsters aged five to 14 were most likely to be injured by toothpicks, and children under the age of five were 20 times more likely to seriously injure their eyes or ears.

Adults should also treat the toothpick with a little respect. Three deaths have been attributed to toothpicks after the people either swallowed or inhaled them by accident.

Toothpicks may be small, but their potential dangers are definite points to ponder. If you have a troublesome piece of food stuck between your teeth, a much safer option to consider is to simply grab your toothbrush!

About the Author: Tracy Dental Excellence

Where patients become family, and our practice serves our community! Tracy Dental Excellence is a general and cosmetic dental practice that strives to restore and enhance the natural beauty of your smile. Through a combination of conservative procedures and state-of-the-art dental technology we can help you achieve the beautiful, long-lasting smile that you desire. Here at Tracy Dental Excellence we want to make your experience a good one so we've put together a list of useful information, including what to expect on your first visit, downloadable new patient forms accepted insurance providers and affordable dental financing options. We also provide certified patient reviews! We are here for you, just let us know how we can help. Your wants and concerns are listened to and heard! Once we understand our mutual goals, we will apply our skills to bring about results we both expect to benefit your oral health AND your smile. You can count on up-to-date information and care. Our entire team attends continuing education seminars and workshops regularly. We source the latest in new materials and methods.
Page load link